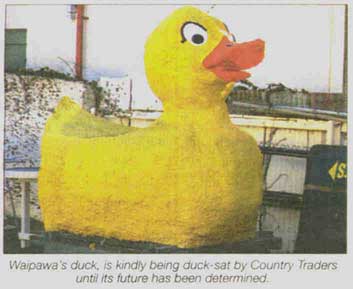 At
a recent Central Hawkes Bay District Council finance and services committee meeting,
Council rejected the Waipawa Chamber of Commerceís request that the duck
be put back up on the main street of Waipawa.

This decision has become quite a talking point in the Waipawa community.

Creator of the duck, Jan Gosling, said ìI think the Council is being narrow minded and are not taking into consideration the depth of feeling shown by the community.

ìIn October last year, a survey was conducted, which showed only 23 percent of people surveyed did not want the duck to go back, eight percent were not worried either way, and 69 percent wanted to keep the duck.î

ìPeople love Waipawaís duck. People passing by would have their photographs taken underneath it, and it brought a sense of humour to the place and lifted peopleís spirits.î

She said the Chamber of Commerce wants to see the duck returned to the main street, but perhaps closer to the trees, so it does not interfere with parking.

Central Hawkes Bay District councillor, Terry Kingston, who was the sole councillor to agree the duck be reinstated said, ìI support the original intent that the duck be up for one month leading up to the Duck race. This is how it was originally, but because of the solid structure of the duck, it was too difficult to move off its perch after the duck race every year.

ìI believe the duck should be placed at the Waipawa swimming baths, as an added attraction to the pool and the town. It should also have an historic sign explaining its significance.î he said.

But Jan disagrees. She said that if the duck was situated at the swimming baths, as suggested by Cr Kingston, it would change its meaning.

ìIt needs to stand somewhere proud and tall. The duck is Waipawaís icon, and it distinguishes Waipawa from other towns.

It doesnít matter if you like the duck or not, it gets noticed. Other towns have icons that at first were not liked, for example Paeroaís L&P bottle,î she said.

Terry Kingston said, ìThe duck is not an icon for Waipawa. The clock town, which has been in place since 1922, has and always will be the Waipawa town icon,î Terry said.

As a result of Terryís submission to last yearís Annual Plan, Council is installing wash lights at the base of the clock tower to make it a more prominent feature in the town.

On Tuesday, July 26, at 5.30pm, Central Hawkes Bay District councillors will be meeting with the contractor and doing test lighting at the Waipawa clock tower. This will be done with portable lights to ensure the designated locations of the lights will achieve the desired result, prior to installation.

As for the duck, the controversy over its fate continues. A petition inviting the community to have their say is currently circulating in Waipawa.

ìThis is available for the community to sign at many local outlets including: Grapevine books, the Chemist Shop, Country Traders, the Waipawa Butchery, and the Library, but only for a short amount of time,î Jan said. ìWe want everyone to get behind us, and help ëSave Our Duckí.î

On receiving the petition council may yet again discuss what should happen to the duck, at next monthís full council meeting.