Will homeless duck quack under strain? 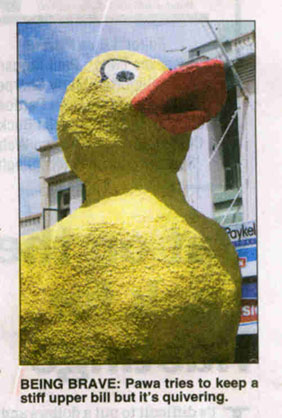 Yes, youve got the bright yellow gormless stare down pat. And yes, youve lorded over Waipawas main street for almost a decade.

But the powers that be (Central Hawkes Bay District Council) have decided youre no longer, ahem, appropriate.
Passé they say. Grotesque. Youre banned from council land  to the river, they decree.

Your owners, the local Chamber of Commerce, are rather flustered by the decision.

Stephen Jenkinson says its just not right to perch you, Pawa, out of sight in the scraggly riverside grass. Hes worried youll meet the same fate as the wrecked picnic tables and graffitied skate bowl.

And he loves you dearly.

A website set up by your creator, Jan Gosling, records every scrap of information written about you. Its had over 30,000 visitors  youre a very popular duck, online at least.

So the nice Mr Jenkinson is on the lookout for a new home for you. A shop front verandah, perhaps, or maybe some telecom-owned land.

And, he says, a meeting next week will decide your fate.

Typifying the split opinion, one visitor logged in this entry to his online travel diary:

One thing that I dont like about Waipawa is that it has a huge statue of a yellow duck that was obviously modelled on the yellow bathtub toy. This statue sits on a plinth right in the centre of town. There is no escaping it.

Lisa, my partner, loves Pawa (for that is the ducks name) and glorifies it. She believes that the duck is Waipawas chance of fame in the realms of large town icons.