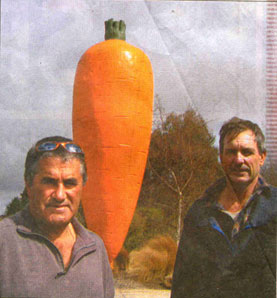 But
one carrot he is happy to see left behind is the giant orange one at the town’s
southern entrance.

Today the Ohakune Carrot, as it has come to be known, is 20 years old and the Ohakune Vegetable and Growers Federation has planned a party.

Mr Taylor said no one had any idea how much attention the carrot would attract when he and fellow vegetable grower Peter Hammond brought it to Ohakune from Wellington on the back of a truck in 1984.

“The original idea was to promote vegetable growing in Ohakune,” he said. “We had seen giant pineapples and bananas to promote townships in Queensland and thought a carrot would be great as an icon for the town.”

Mr Hammond lobbied the local council for two years to get approval to have the carrot put up in the town.
But at every turn he was met with opposition and petitions were signed against it.

At one council meeting he dressed in orange overalls and a hat with carrots dangling from it to promote his case.

“Women said it was a revolting idea and a phallic symbol,” Mr Taylor said.

At first, the two men thought they would have to raise the money to build a carrot themselves, but ANZ Bank stepped in and donated a giant carrot it had used for a television advertisement.

The pair travelled to Wellington in Mr Taylor’s truck to collect it.

“It took two days to get the carrot back to Ohakune. We stopped at every town on the way and met the mayor.” Mr Hammond said. “We started with one truck and, when we got to Raetihi, we had a convoy behind us.”
Back in Ohakune, it took another six months to decide where to put the structure. Eventually it was ‘planted’ beside State Highway 49 at the entrance to town.

Despite leaving Ohakune 15 years ago to work as a landscaper in Auckland, Mr Hammond is still enthusiastic about the carrot.

“It was a one-off. Even though the idea was to promote vegetable growing in the region, the whole community has now got in behind it. It’s that whole collective thing which I like about it. That’s why it’s been a success.

Like its soft drink bottle cousin in Paeroa, the nine metre tall fibreglass structure has become world-famous in New Zealand and beyond.

Hundreds of tourists have had their photographs taken beside it, and families measure their children’s annual growth spurts beside it. It has weathered the regions extreme climate vandalism and endless phallic jokes.

Today, the growers association plans a day of festivities to coincide with the 20th year of the carrot.
Association spokeswoman Kandy Mott said it would be like an old-fashioned country sports day with forklift loading, vegetable sorting competitions and vegetable obstacle races.