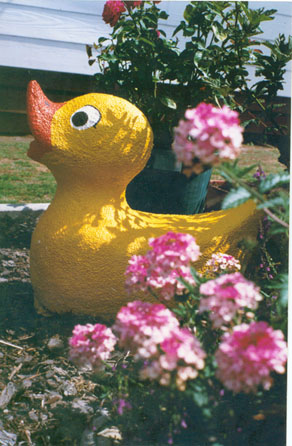 OVER the last few months we have run the tragic story of Pawa the large concrete duck sitting in Waipawa’s High Street, who in a fit of depression dropped her egg and then was unable to look after it or the hatching duckling herself.

But unlike some sad stories this one has a happy ending.

Wai the beautiful bouncing duckling who hatched from the egg has found a new home in Pukehou with a new mother to care for him.

His adopted mother, Carolyn Symmans is delighted with the new addition to her family and says he has fitted in very well with his large extended family of adopted brothers and sisters of all shapes and sizes.

Wai has left the bright lights of Waipawa and fitted in well to the country life.

He can be seen going for rides on the back of Bob’s farm bike, grubbing up the back paddock with Zena the kune kune pig, or chewing the cud with Homebrook Holly Symmansí the cow.

No facet of life seems to deter him.

He will even sit on the clutch of imaginary eggs in the hedge for his adopted sister Gertie the turkey (who has a strong maternal urge and a vivid imagination), so that she can be free to go out into the paddock to graze with the rest of her turkey brothers and sisters.

But although Wai is always willing to pitch in around the farm, he still likes his moments of quiet and solitude, and he is often found sitting amongst the roses of Carolyn’s garden watching frogs jumping off lily pads into the fish pond or looking down the hill at the traffic which is travelling towards and from his hatching place, grateful for his new home and mother, but not forgetting the duck who gave him life.