Waipawa on the web 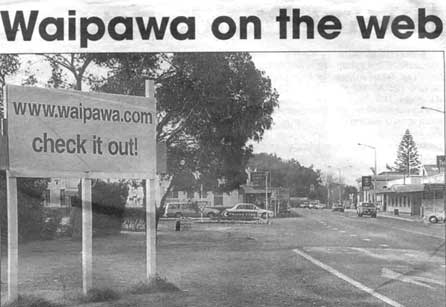 The controversy of Waipawaís duck has been long and furious with opinions expressed on both sides of the arguments.

Whether to keep the duck or scrap itÖ

Whether the duck is cute and adorable or just plain uglyÖ

The arguments have gone on and on both in the press and on the airwaves. And now these arguments have reached into the electronic age with the launching of the duckís own website.

Over the last nine years, since the conception of ìPawa the Duckî, its creator Jan Gosling has been collecting its story.

Every article written and published has been compiled in one place and made into the basis of this website. The articles are often humorous telling a story about how the duck was made, how it laid an egg and the resulting duckling, the search for the missing father duck, and much more.

More recently articles have concentrated on whether to keep Waipawaís now famous icon, and also include a survey which show that many people in Waipawa do in fact want to keep the controversial duck.

Icons from other towns also appear on the website, perhaps showing that Waipawa is not the only town who craves to have a point of uniqueness which sets it apart from others.

And finally there is another section which tells a condensed childrenís story of ìPawa the Duckî which is a book written and illustrated by Jan Gosling to answer a question asked of her many times by children ìWhy did you make the duck?î

The original idea of having a website came from Janís son, Brian, who bought the ëwaipawa.comí domain name when he was visiting China at the beginning of the year. He is currently in his second year at Massey University studying computer science and has found that working on this website has been a bit of light relief from study.

To reach this website, and perhaps have a good giggle, just type into your computer the website ís address www.waipawa.com.