No ducking the big issue in Waipawa

Waipawaís giant yellow duck is at the centre of some heated debate for a second time.

Some residents in the small Central Hawkes Bay town think the 400kg concrete duck ñan unofficial mascot ñ has no place on the townís main street.

It was not high-brow enough, some say.

But there are others adamant that the duck, which is called Pawa, has put Waipawa on the map. 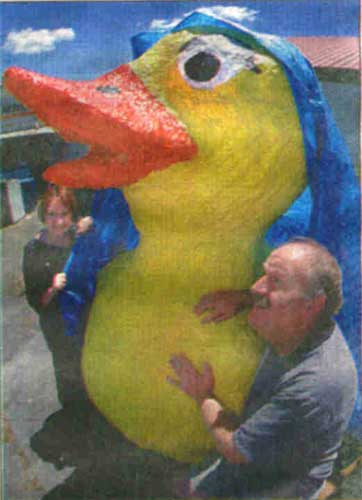 Waipawa Chamber of Commerce president, Stephen Jenkinson said kids love it and the duck was a central place where locals could say ìIíll meet you next to the duckî.

The chamber owns the duck and is seeking ideas about where to put it next after Pawa had to be put into storage during street redevelopment.

Discussions are now under way about where to put it when the work is finished. Suggestion includes the carpark opposite the Central Hawkes Bay Museum or near the Memorial Swimming Pool.

The duckís final fate will be known once the improvement works are complete.

Mr Jenkinson said that the duck had long been the subject of debate among the locals.

ìThere are definitely two opinions ñ some people love the duck and think itís wonderful and some people think itís not high-brow enough or sophisticated.

ìThe duck has put Waipawa on the map because it is something different and something no other town has got.

Pawa was created by local artist Jan Gosling eight years ago to be driven around town on a ute during the annual spring festival, where duck races are an institution.

It proved so popular it ended up on stilts along the main strip.

Pawa has a smaller cousin duck in Nelly Jull Park.